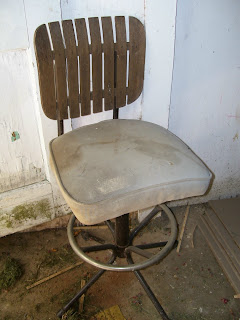 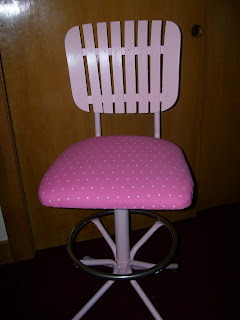 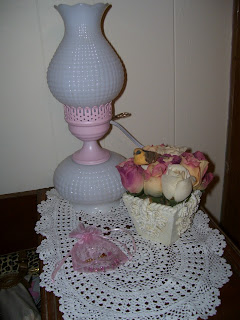 I had a lot of pics to post, but not sure which folder I put them in. This is an old bar stool we found in the garage and was going to end up in the garbage. The lamp was a thrift find and I forgot to take a before shot, but take my word, it was dirty and rusty and I re-wired it for safety reason.
We still have another stool but the wooden seat is in bad shape, so Al is going to cut a new one and I will be painting it in black with a red print seat for my friend who has been helping me paint.
I started stripping an antique dressing table and I don't like the paint stripper Al brought to me, so will get what I normally use. I have many things to post, but it's slow to load, so will only do a few at a time. Crafting feels great again and I have a birdhouse that I was to put lace, scrapbook paper and some bling.
Prayers for my friends in Georgia and all the people affected by the floods. Such a sad thing. We also have been having rain almost every day and today was really bad.
Well I should be asleep and actually I did fall asleep at 6pm, but awoke around 10pm. I hope you all have a great weekend. Not sure if I made my 400th post yet, so will check and try to have a giveaway. Love, hugs, and blessings to all of you, Pat
Posted by The Urban Chic at 12:46 AM 10 comments:

What to do when your own brother assaults you?

This is not an easy subject, but my brother has been giving us problems and was stealing things from the garage and has taken all my dad's tools without permission. He came to get some flower pots that my sister said he could have but she asked me to go in and make sure that's all they took. He got upset and told me not to look at him with "those eyes"--whatever that means. Any way, he locked me in the dark garage and when I walked to the door and turned the deadbolt, he shoved the door into me, but I grabbed onto a bed frame to keep from falling. I was stuck in a corner and he grabbed me very hard by my arms and when I told him to let me go because he was hurting me, he shoved me to the floor atop a stack of boards. I had over 7 bruises on my back and a bad scratch on a piece of jagged wood. I couldn't move because I fell right on the bulging disk. He told the police that he never touched me but I will post the pictures when I transfer them from my laptop. I have his entire finger print bruises on both arms. I also hit my head on a ladder. I called 911 and he asked why I wanted to do that, because he had enough problems already. I know I am pouring my heart out in public, but there is more to this that I just can't divulge. I was taken away in an ambulance because I had to take a nitro. The doctor refused to Xray me and they gave me Nothing for my pain. This was Saturday and on Friday, I had to go in for an epidural that did not help at all. The physical and mental exhaustion is what caused me to become ill and has weakened my immune system, therefore, they have me resting for 3 to 4 days. I reported it to the police and filed a complaint--I do want to press charges, but not sure if I should. He is violent and we had a very expensive deadbolt put on my bedroom door. Brenda called him and told him he is not allowed on the property because I am paying rent, so he is very angry. I am just confused about what to do, but the female deputy said I should bring charges because abusive men are likely to do it again.
All opinions are welcome.
I did sit in the bed today and made a bible bookmark for our Church Bazaar and a pocket rosary.
I lost another 2lbs and not sure why. I will be making an appt. with my gastro doctor to have a second opinion and I see my pain management doctor on Thursday---he was very upset when he saw the bruises. To top things off, Al accidentally dropped a heavy board on the top of my foot and have a very bad contusion, so can barely walk on my left foot.
Sorry that I always have bad news and rarely anything good to say, but I am doing extra praying for my smile and happy attitude to return and I know it will. I am tough cookie and never give up, no matter what cross God sends me. My Faith is strong, so I know I will heal from all this drama. I have done so much for my brother and it's just hard to believe that he could be so cruel and then lie to the police, but I don't think he realized that the bruises would show. He told them I slipped and fell---his wife even told him not to lock me in, then she told the police that she accidentally locked me in, but yet I saw him when he slammed the door and put the key in.
Okay, enough of that. I have been re-doing some things that I found that were horrible and dirty and can't wait to show you next week.
My 60Th birthday came and went and was very uneventful.

Please keep my little grand niece in your prayers. Her swab test came back and she has swine flu, but a mild case, but they are watching her closely. This is Libby that I took care of when I lived in Gramercy. We had 5 people die in Louisiana just this week.
Well I need to get back to bed. It's easier at night because most people are asleep, so I have an easier time with the dial up. Blessings to all of you. Pat
Posted by The Urban Chic at 1:00 AM 6 comments:

Hi everyone. Dial up is very slow, but I am at Al's today because of a trip to the ER. I have not been well and now they put me to bed for 3 days of complete rest. I have a viral infection brought on from exhaustion. I'm not sure how to do that, maybe someone could teach me. I will know on the 29Th if the cardiologist will do an angiogram. Will let you all know. The nitro seems to help and they have added another cholesterol med to my ever growing meds. I just want to flush them all down the toilet, but they are keeping me alive and no side effects. I keep losing weight and hope to take a picture soon, but right now I am not looking my best. If they don't figure out soon why the weight lost when I eat so much all day, I am considering going to MD Anderson in Houston.
My hair is down to my waist line now and I am hoping to get it cut soon and send it off to locks of love. I will be heading back home this afternoon and I do have some new photos to post.
I hope to visit all of you next week and catch up on the latest news.
There is no DSL in the country and I live 72 feet from the one that is available, so I am stuck with dial up until more neighbors want to use computers. But life is so simple there that it's hard to stay indoors. Yesterday, I saw the cutest little bluebirds and lots of beautiful butterflies. The heat wave is soon going to be gone and we are due for some cool weather.
Well I have things to pack---bringing more craft supplies with me, since I feel like crafting again, but reading will be all I'll do for 3 days.
Please keep me in your prayers---I need them so much. Love and hugs, Pat
Posted by The Urban Chic at 2:34 PM 3 comments: 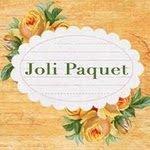 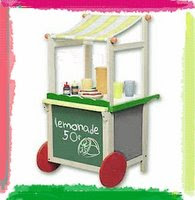 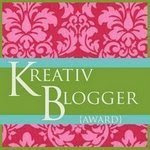